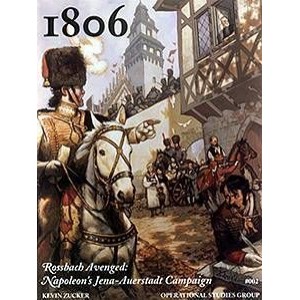 Time: 1600 hrs. October 13, 1806
Napoleon and Lannes are standing, surveying the situation from the Windknolle. Beyond the slope, they can begin to see the fire lights of the Prussians in the valley. The Saxon General Tauenzien now occupies the Dornberg after earlier relinquishing the Landgrafenberg and, more critically, the bridge over the Saale at Napoleon's back. After studying the glow of Prussian campfires Napoleon correctly surmised the entire Prussian Army was nearby. He mistakenly assumed, however, they were preparing to fight him here. This almost proved fatal for Marshal Davout, approaching from the east. For on the morrow, while Napoleon and the majority of the French fight here, Davout's III Corps alone will engage the bulk of the Prussian Army at Auerstadt.