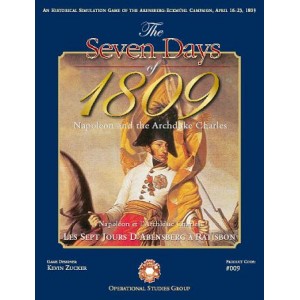 THE TIME IS: 0500 hours., 17 April 1809
At the end of a 96-hour journey from Paris, as the Emperor stepped out of his carriage in Donauwörth, Bavaria, his army was in an extremely hazardous position. Even if Davout and Massena had concentrated, the position would have been bad enough. But, thanks to Berthier's misunderstandings, they are ninety miles apart. The Archduke Charles, with nearly 90,000 men, is moving across the Isar River at Landshut. Two very easy marches will take his main body to the Danube at Kelheim or Ratisbon, whilst between Massena, in Augsburg, and Davout, in Ratisbon, were four days march. In this space there was nothing to oppose the Austrians except 27,000 Bavarian troops.

Inside Berthier's headquarters the Emperor did not find that marshal, who had gone to Augsburg, but sat down to study his correspondence in the office. He now learnt that Davout had first retired behind the Altmühl River, above Ratisbon, and had been sent forward to Ratisbon over very bad cross roads.

The Emperor's first move was to send his aide-de-camp Savary to Davout to warn him of the absolute necessity of getting in touch with the center, even if he had to abandon Ratisbon. In that case, he was to destroy the stone bridge there, so as to prevent the Austrian northern wing from falling on his rear.

At 8 A.M., news arrived from Lefebvre that an Austrian force of unknown strength was issuing from Landshut, driving the Bavarians before it. Later Napoleon discovered this column comprised four army corps, with two more moving on parallel routes.

While the Bavarians slowed the "column of Landshut," Davout was ordered to move on Neustadt and Geisenfeld, and Massena on Pfaffenhofen, along the Ilm River, closing up the gap between the two marshals. But the Austrians had other ideas.

SEVEN SCENARIOS: The Austrian Advance to the Danube, The Trap Closes, The Emperor Arrives, The Battle of Abensberg, The Maneuver of Landshut, The Battle of Eckmühl, and The Campaign Game (various start dates).

COMPONENTS: One 22 x 34" map and 280 two-sided units; 32 pages of rules including campaign analysis, designers notes and more; 8 player aid cards, including French and Austrian March Tables showing the positions of all units and leaders on the morning of each day, and turn record track.