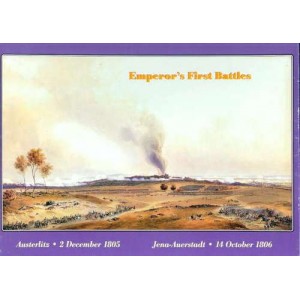 Emperor's First Battles includes two of Napoleon´s most famous battles, Austerlitz 1805 and Jena-Auerstädt 1806. Almost the same rules system as `Napoleon´s First Battles´, but with a few changes. Army morale is important in this system. Once your army disintegrates, all your units suffer adverse and permanent effects. Their combat strength is halved, for example.

480 die-cut counters and two 22 x 34" maps (one for each battle). The counters of the French III Corps were printed in the wrong color. They can still be used, but replacement counters are also available from Decision Games.

Emperor's First Battles includes Austerlitz and Jena-Auerstadt, in which the French Emperor, Napoleon Bonaparte, won smashing victories against the armies of the old regime of Europe. Emperor's First Battles game system is based on the Decision Games' release Napoleon's First Battles. It includes rules for elan, command control, and functional differences between infantry, calvary, artillery and filed engineers. The game also includes updated calvary rules, allowing it to perform historical screening functions. Austerlitz (2 December 1805). Napoleon and the La Grande Armee march into Bohemia to confront the forces of Imperial Russia and Austria. Jena-Auerstadt (14 October 1806). In the year following the French victory at Austelitz, the Kingdom of Prussia declared war on France. The Prussian army, its reputation prized since the days of Frederick the Great, march forth to meet the French in Saxony.

There are a basic and an advanced game. The wargame utilises the standard CRT (Assault Combat Result Table) which includes disruption. An elan rating is included to show the capability of a unit to close with the enemy in battle.

A separate artillery bombardment table is utilized to show the effects of artillery.