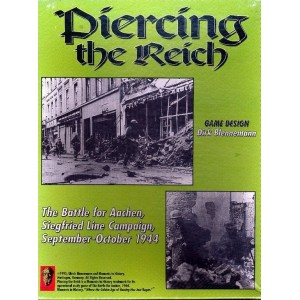 Piercing the Reich is an operational level simulation of the Battle of Aachen, 12 September to 21 October 1944.
Piercing the Reich is modeled after a modified version of the popular Triumphant Fox system, using an innovative, interactive sequence of play. With individual formation activated, the focus is on command control, keeping both players constantly involved in the action.