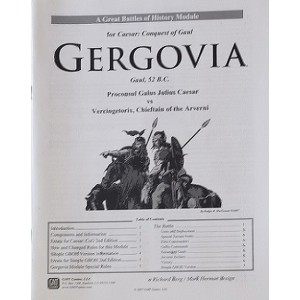 A Great Battles of History Module for Caesar: Conquest of Gaul
Julius Caesar and his Gallic Legions versus the Arverni and other tribes of Gaul, under Vercingetorix. 52 BC.

For those of you who can’t stand someone who wins all the time, here is an opportunity to game one of Julius Caesar’s rare losses. The Battle of Gergovia was Caesar's failed attempt to wipe out the threat of a large Gallic uprising by isolating and defeating a gathering of the Arverni, plus several other Gallic contingents, under their new chieftain, Vercingetorix.

The Arverni had taken a defensive position in the hill fortress oppidum of Gergovia, a position somewhat similar to (but much smaller than) that that they would take at Alesia but, given the surrounding terrain, a bit more difficult to take.

In a series of short battles that took place mostly below the walls of the oppidum, and probably helped by a topless show from the Gergovian women (really!!), the Gauls managed to drive off the Romans, inflicting on Caesar his only serious loss in his 8 year campaign.

The Gergovia module comes with its own map but uses, mostly, counters from Caesar: Conquest of Gaul, along with a few extra tribesmen counters. It also uses the rules for C/CoG (preferably the 2nd edition (2006), but the original version will work just fine.)

And while the hilltop oppidum of Gergovia is fortified, Gergovia is not a siege assault (for the most part), but a rather disconnected series of attacks, feints and mistakes. The terrain is not overly conducive to linear combat, the approach to Gergovia being fairly steep and somewhat rocky, but Caesar, Roman that he is, has already built two camps and a sunken trench for easy movement.Gergovia is a tough game for either side, as the options and possible strategies are multiple.

Designed by GBoH’s own Caesar (Julius, not Sid), Richard Berg and Developed by his House Labienus, Al Ray, Gergovia contains one full map, one small sheet of counters, and all rules needed for the battle (as a scenario for Caesar: Conquest of Gaul).