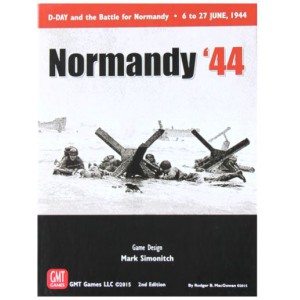 Normandy '44 is a 2, 3, or 4-player, regimental level game of the D-Day landings on June 6th and the battles that raged in Normandy for the next 21 days. During this crucial period the Germans had their only chance to push back the Allied invasion before the preponderance of Allied men and material made the outcome certain. During this period, the U.S. 1st Army fought across the Cotentin Peninsula and captured the major port of Cherbourg while British forces took on the bulk of of the German panzer divisions near Caen.

Each turn represents 1 day. Each hex represents 3.8 kilometers (or 2.3 miles). Most units are regiments or brigades though most of the armor units are represented as battalions.
The game uses a simplified Ardennes '44 system: Move, Fight and Reserve Movement. All non-tank battalion units are rated for Troop Quality, while all armor units have a Tank Rating. In each battle these ratings are used to provide shifts for either the attacker or defender. Other important shifts are provided by air power, naval support, artillery and/or Tiger tanks.
The game includes a 22 turn Campaign game, a 7-turn Tournament Scenario that focuses on the Allies linking up the beaches, and a scenario covering the battle in the peninsula and the capture of Cherbourg. In addition, there are rules for allowing 3 or even 4 players to play the game.
Illustrated Samples: 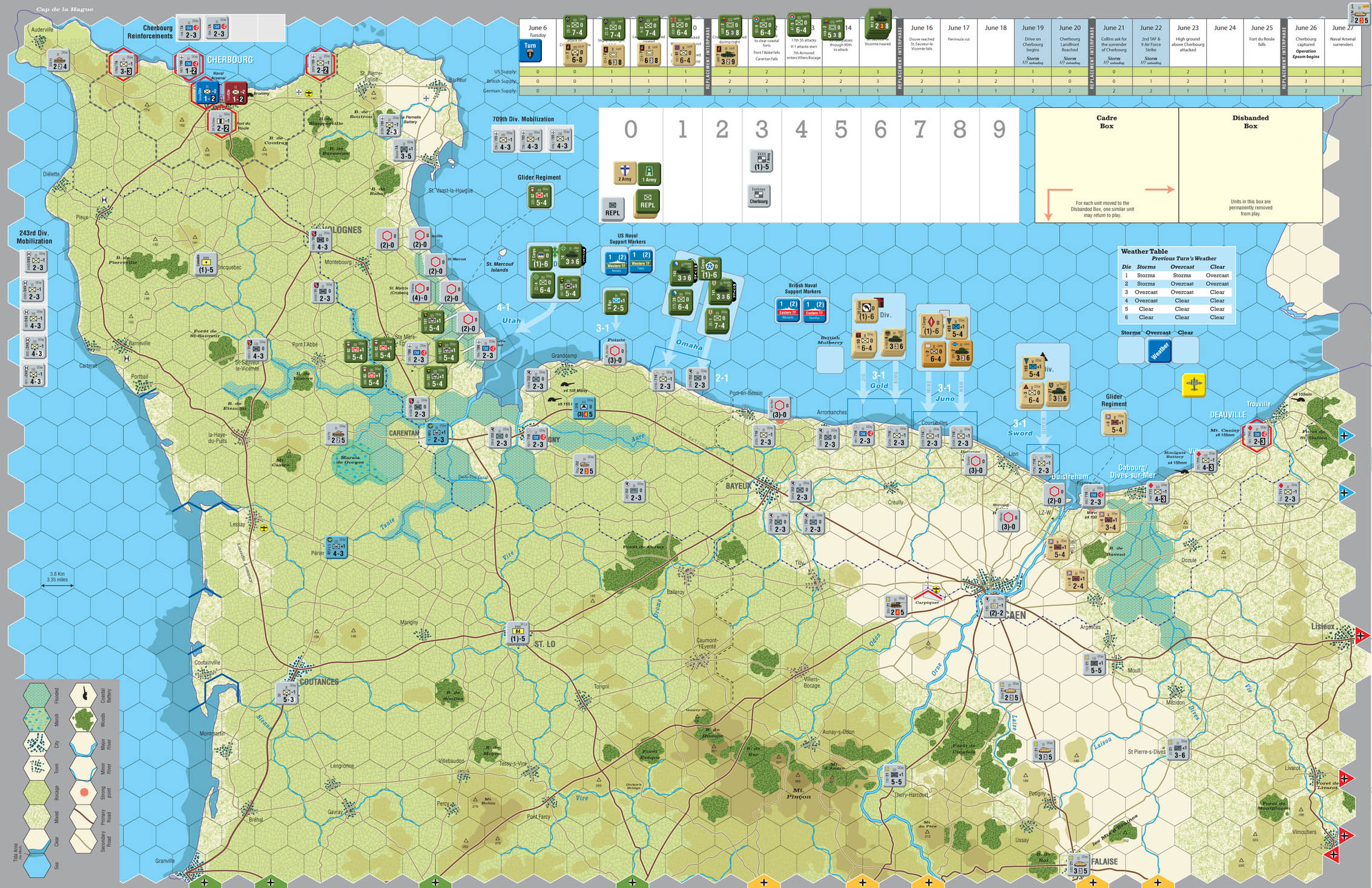 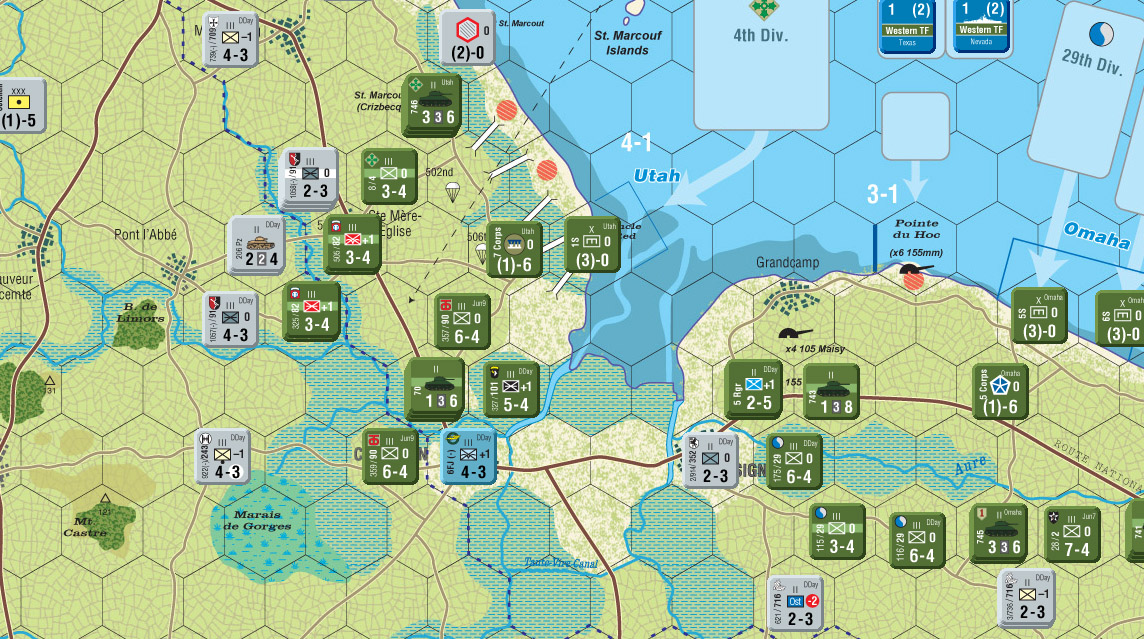 A picture at the end of turn 3 (June 8th) of a playtest game. In the Utah beach area the American forces have just taken Crizbecq battery and are closing in on Carentan. The 29th and 1st divisions are pressing south towards St. Lo against dwindling German forces. 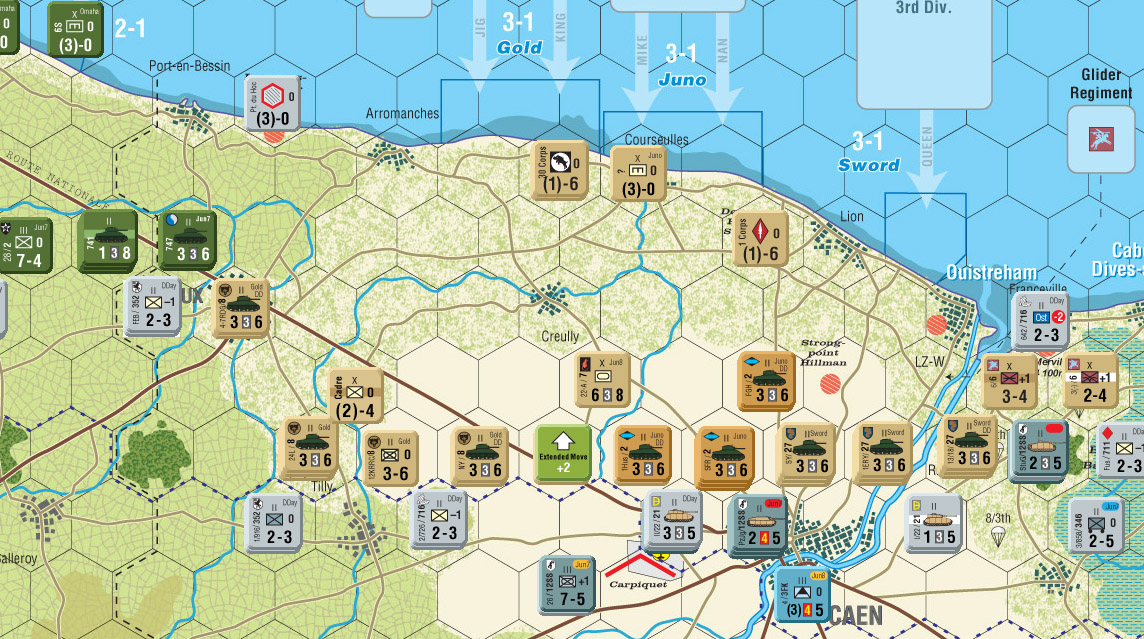 In this view (end of Turn 3, British sector) the British have closed up to Caen but will find further progress difficult in the face of the 12SS and the 21st Panzer Division. Elements of both panzer divisions are causing havoc in the British 6th Airborne sector. Over to the west the depleted 352nd and 716nd divisions are trying to delay the battered British 50th division and its supporting 8th Armored Brigade.