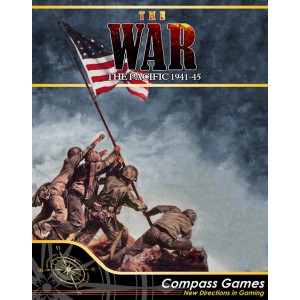 The War: The Pacific, 1941-1945 borrows many concepts from TWE, so experienced TWE gamers will readily adapt to TWP’s game system. However, TWP doesn’t just port European Theater rules to the Pacific and hope for the best. The game features sophisticated carrier-warfare rules that capture the unique features of the Allied naval struggle against Japan. Further, TWP isn’t just a naval strategy contest. Unlike some WWII strategy games, Nationalist China plays an active role in TWP, and a player’s diplomatic strategy in China may be as important as his military strategy.

Playing times range from less an hour for the smallest scenarios up to 40-50 hours for the full campaign. For those who want to run the full Europe-Pacific campaign, joining both games together, you’ll need about 80 hours to recreate all of World War Two.