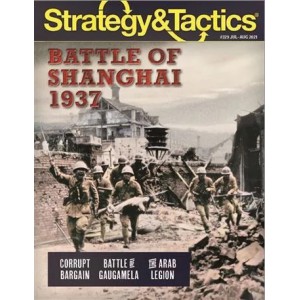 The Shanghai-Nanking Campaign 1937 (SNC) is a two-player historical simulation of the largest single military campaign fought anywhere in the world during the interwar period. The Japanese player is primarily on the offensive, attempting nothing less than ending China’s existence as an independent country via the political shock of the rapid conquest of that country’s primary port and capital cities. The units of maneuver are Japanese regiments or Chinese divisions. Japanese regiments were uniform and varied on their combat experience. Chinese divisions varied in manpower and training and so their combat strength and second step are reflective of those factors. Each hexagon on the map represents seven miles (11 km) from side to opposite side. Each full game turn represents approximately two weeks.