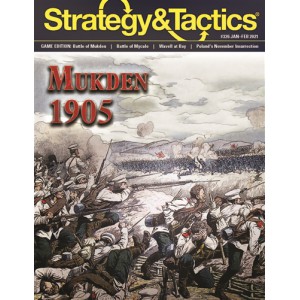 Mukden 1905 is a two-player simulation (easily adapted for solitaire play) of the climactic struggle of the Russo-Japanese War of 1904-05. Both players have the opportunity to attack and defend, but the main burden of the offensive is on the Japanese player. Scale: Each hex represents three miles (4.9 kilometers). The units of maneuver are regiments, brigades, divisions and one (cavalry) corps. Each full turn represents two days of real time.