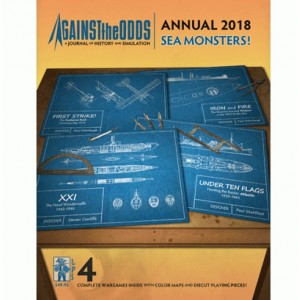 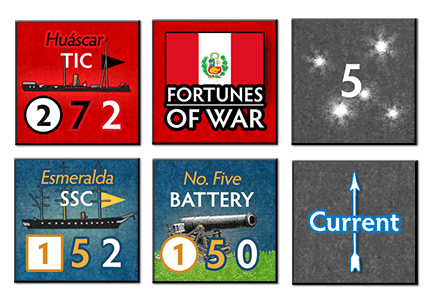 Paul Rohrbaugh with Iron and Fire is a moderate level complexity game covering the battles fought by the Peruvian Ironclad Huáscar during the 1879 War of the Pacific against Chile. It outclassed everything it met but there was only one (think of the SF classic, Ogre, but on the waters this time). 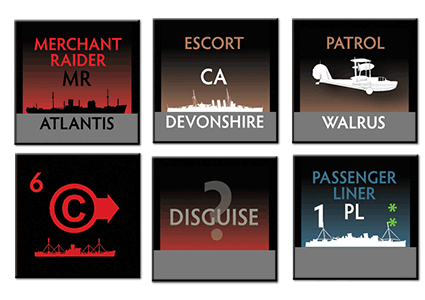 Paul Stuhlfaut with Under Ten Flags starts early in 1939 when the German merchant raider Atlantis made its way into the South Atlantic to sink and capture Allied cargo vessels. Its crew used their skill in disguising the appearance of the vessel to aid its encounters or avoid enemy warships. The journey of the raider Atlantis lasted for over 600 days and traveled over 100,000 miles. 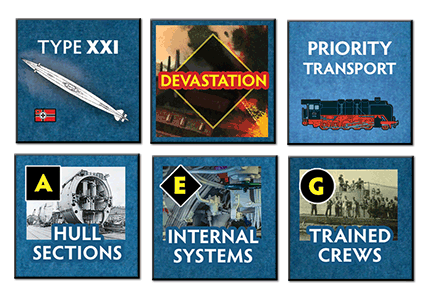 Steven Cunliffe with XXI, a solitaire game set in 1943 that challenges the player (acting as both Speer and Dönitz) to organize and complete construction of a fleet (or at least “enough”) of the new German Type XXI submarine. However this new sub is far larger, more complex and more expensive, and requires much more manpower and scarce resources than previous submarines. Just a few of these new Type XXIs will do nothing. Only a radical transformation in shipbuilding techniques to mass produce the design - and not giving in to setbacks - will enable this “wonder weapon” to arrive in time.... 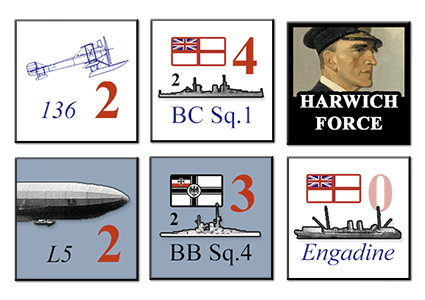 Paul Rohrbaugh with First Strike looks at, well, the "first strike" by British airplanes. On Christmas Day, 1914, float planes were brought near land by the earliest "seaplane tenders" and turned loose on an "air reconnaissance" by planes which just happened to be carrying bombs and looking for Zeppelin sheds. There was also hope of luring out the German fleet, and an unexpected result of having the British naval force attacked by German airplanes.

As always, this Annual features an "extra-size" magazine, with in-depth accounts of the history behind the games, plus other articles. Make yourself the proud owner of this challenging look at the "monsters" men would face - and create - to seek control of the seas.