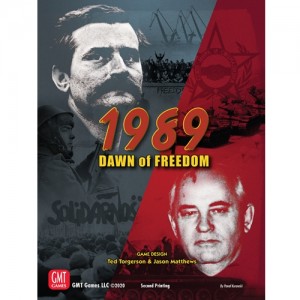 "History punishes those who come too late." - Mikhail Gorbachev 1989 is an exciting, fast paced game simulating the end of the Cold War in 1989. During this amazing year, a series of democratic revolutions ended the 40 year Soviet empire in Eastern Europe. 1989 simulates the political, social and economic aspects of these revolutions using a card driven system similar to Twilight Struggle. "No man is so old he cannot live one more year." - Leszek Kolakowski One player plays the Communist. At the start of the game he holds unquestioned power across the six nations of the Warsaw Pact. But there are omnious clouds on the horizon. The new leader in Moscow has declared no more will Soviet tanks prop up tottering Communist governments. The economies, after decades of central planning and stagnation, have reached various stages of crisis. Inside the churches and among the students and their professors there are dissident movements that have been emboldened. From crushing dissent to offering concessions, the Communist player will have to use a variety of strategies in a struggle to hold on to his empire. "A bad regime is never in so great danger as when it tries to improve." - Alexis de Tocqueville The other player plays the Democrat. At the dawn of 1989, behind the iron curtain, no one considers revolution possible. The goal of dissidents is to create a civil society outside the control of the Communist regimes. On their side are students who are fascinated with the style and pop culture of the west, and the Church. Against them is the vast apparatus of the Communist state. Their challenge is to persuade the workers, who are the bulk of society, to join their cause. "Mr. Gorbachev, open this gate. Mr. Gorbachev, tear down this wall!" - Ronald Reagan What Players are Saying: "A Twilight Struggle beater, at last. Great design, great events/cards, addition of the Power Struggle mini-game, marvellous theme, addictive gameplay, wonderful tension. Outstanding." -Conor Hickey BGG "An amazing game! Excitement galore and plenty of theme in addition to having a streamlined version of the superb Twilight Struggle game engine. I suppose the theme, which may be relatively obscure to most board gamers, makes it less likely to attain mass popularity like its older sibling, but, boy, is it a magnificent game!" - Kristof Bodric BGG "This is a highly impressive game built on the foundations of one of the greatest games ever created. It definitely merits its place as a game in its own right because like 'TS' it wonderfully captures a moment in history and incorporates one of the most tense and immersive gaming experiences within it." - Tim Roberts BGG "Thematically even more intense than it's predecessor and older Brother Twilight Struggle! If you are at least a bit interested in the Theme and/or can remember this time it's a must have!" - Conrad Gill BGG "Rich and gut wrenchingly tense. The violent swings thematically correct - game play wise means you are living of knife edge and need to treat them as twin imposters. I like the Power struggle despite the time it adds - really adds tension and again fits with theme. Better than TS? I think I prefer TS but this is truly fabulous." - Paul Lister BGG "Our first game of 1989 went all the way to final scoring, and the Democrats (me) won by 12vp over the Communists (Becky). The game was much closer than that for most of the session however. The Power Struggle mechanic is a fantastic addition to the Twilight Struggle based scoring system. Loads of tension and agonising decisions the whole way through. Fantastic game." - Shaun BGG "The most rich, thematic and best boardgame to play this year." Thomas de Wolf BGG "This is a brilliant take on the TS game engine." - Roger Leroux (BGG) TIME SCALE 1 turn = 2 months in Early Year; 2-3 weeks in Late Year MAP SCALE Point-to-Point NUMBER OF PLAYERS 2