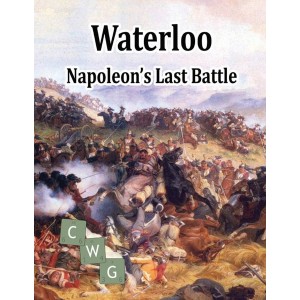 Waterloo: Napoleon’s Last Battle allows players to refight one of the most famous battles in history. One player assumes the role of the Emperor Napoleon Bonaparte commanding the French army and the other commands the British-led allied army under the command of the Duke of Wellington and the Prussian army commanded by Gebhard von Blücher. Fast paced and exciting area impulse system in which players take alternating impulse actions until both players pass or a die roll ends the impulse phase potentially catching one or both players off guard. The map is broken up into areas of differing sizes and shapes depending on the type of terrain. Units are activated in an area by their respective Leaders. The combat system is based on opposing die rolls, after adding the strength of their units, terrain and other bonuses. Commanders and leaders can potentially lead attacks or intervene to save a failing defense.