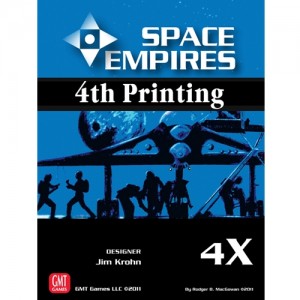 Space Empires 4X is a game in the finest tradition of 4X space games - eXplore, eXpand, eXploit, and eXterminate. This game is Rich in Theme. Carriers, fighters, mines, cloaking, dreadnoughts, merchant shipping, colonization, mining, terraforming, shipyards, black holes, warp points, non-player aliens, Doomsday Machines - everything an Epic Space Opera needs. Despite that, the rules are Incredibly Simple. Almost 20 years in the making, many elegant solutions have been developed to remove complexity and make the game intuitive. 1 to 4 players eXplore the random map. Each space can reveal any of 12 different terrain effects like asteroids, nebulae, and planets. Terrain is important as it impacts both combat and movement, as well as how you will build your empire. Players then eXpand their empire by forming colonies (long term, steady growth), harvesting resources (quick income), and building a merchant fleet (trade income). This infrastructure must quickly be eXploited to build a fleet from up to 10 different classes of warships and researching critical technology from among 50 levels of advances at your disposal. The competing empires quickly come in contact and vie to eXterminate each other. This is where your technology and fleet decisions will be proven. Combat is simple (there are no complicated charts), but rewards good, balanced fleet construction. Building only the largest capital ship is not a good idea. Your fleets will actually feel like fleets! There are Multiple Scenarios for both solitaire and 2-players. Multi-player scenarios have the option for team play, including 2 players against 1 in a 3-player game. Scenarios can be customized in length and some can be completed in as little as an hour. Many aspects of the game can be completed simultaneously by the players so that there is very little downtime. This is a game that can be completed in one sitting! Players and Playing Time: 1-4 Players 1-4 hours to play depending on the scenario