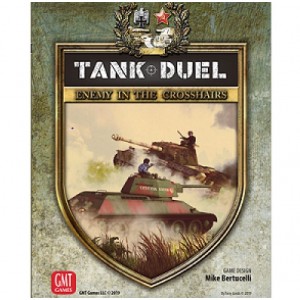 Tank Duel: Enemy in the Crosshairs

(0 評價)   |   如果您對本商品有什麼問題或經驗，請在此留下您的意見和建議！
分享
產品詳細介紹 商品評價 (已有0條評價)
The day dawns like any other.  The sun makes its way low over the misty horizon and stays low in the Autumn sky this morning.  All is as it has always been in the fields and meadows of the Steppes.  Commander Garrison Dietrich raises himself through the cupola of the Tiger he commands and begins to scan the landscape.  He looks left to right, right to left searching the fields for his target.  He breaths in deep.  The scent of metal and leather, sweat and stale cigarettes, rises from inside the musty tank.  He studies the landscape and he listens. With heart pounding and senses alert he is poised…. anticipating.  For Commander Dietrich, tank to tank warfare is more than a duel.  Beyond the field-rocket artillery, the bombers and U-Boats, the single-seat fighters, beyond the 88mm Flak, is the Tiger. His Tiger and platoon,  only the T-34s of the Red Army standing between them and victory! Suddenly, to his right, geese startle from the tall, drying grass of the field.  They fly fast and out of view quickly.  Commander Dietrich turns his gaze sharply to the right and there, indistinctly outlined, silent, foreboding...his eyes make contact with it - a Russian T34. Inside the tank, his team is alert and ready.  In the confined space of the tank they are in position. Through the radio they hear the call, "I spot 'em at 1600, 1600!!"  Through the narrow rectangular window the driver attempts to locate the T34.  An AP shell is loaded into the breech. The gunner yells, "Ready to fire!"  His heart, too, is pounding.  Loud sounds now, the gears, the clacking of Bogey wheels over terrain, the vibration of the motor...then, "Hull down, hull down," is called out to the driver.  The Commander orders, "Traverse, traverse...TRAVERSE!"  The turret moves slowly, the sounds of machinery moving but slow, too slow!  The alert gunner feels the rush.  "I've got 'em in my sights, 1400...1200! Do you see him, do you see him?" The panic, the fear, the adrenaline are palpable.  "I've got 'em sir, I've got 'em!!"  The anticipated command comes as the tanks advance..."FIRE!"  The gunner aims, pulls the lever, and its SHELL AWAY….

Tank Duel: Enemy in the Crosshairs is a card-based game for 1 to 8 players that depicts tank-to-tank warfare on the Eastern Front of World War II in the early to mid 1940s. It attempts to convey the claustrophobia and urgency that tank crews experienced in this bitter conflict, utilizing a simple Action system to keep the action moving at a rapid pace. Players will issue commands with the use of Battle Cards and attempt to score Victory Points by claiming Objectives and eliminating their opponent's tanks and crew.
Tank Duel comes with a full solitaire system allowing one player to test their skill as a Tank Commander against devious "bot" controlled tanks. The "bots" are straightforward to run but use the Battle Deck in innovative ways to surprise and delight players on every turn.
Tank Board
The tank board will be used to keep track of information regarding the status of a tank and its crew.  Types of condition could include, tank on fire, damage tracks, immobilized and damage to the gun. 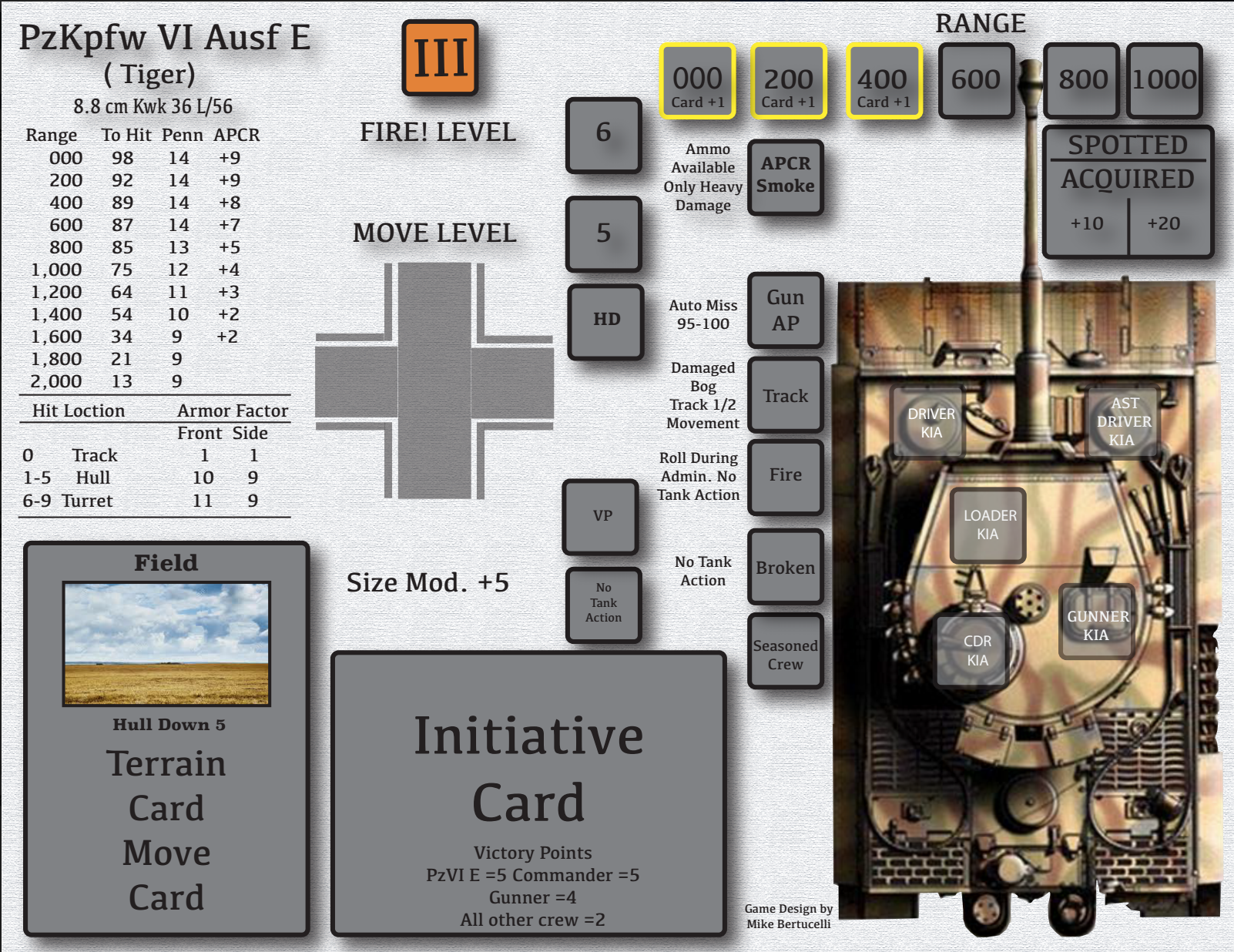 The crew information will include health of each individual crew member, the crews experience, and morale status. The board also contains areas to manage your spotting and acquisition of enemy tanks and range on the battle field between tanks.  There is also a box to hold the terrain that the tank is currently in or its movement status as well  pertinent firing information.
Here is an example of some of the cards that are included in the battle and damage decks for Tank Duel: Enemy in the Crosshairs: 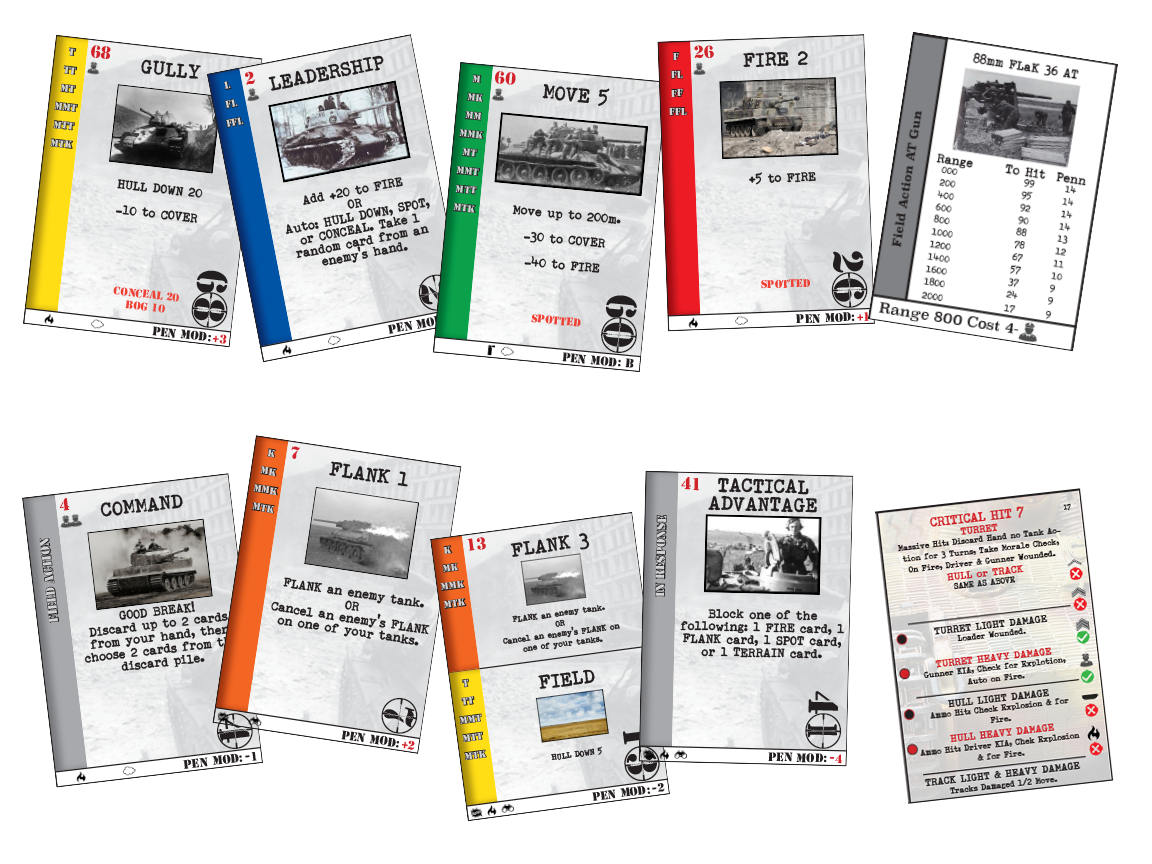 Each player will be managing a hand of cards. With these cards the player will be able to take actions. Some of the actions a player may take during his turn could include:
When a tank receives damage, the player reveals a card from the damage deck and applies  the results to the tank and the moral effects to the crew.
Components