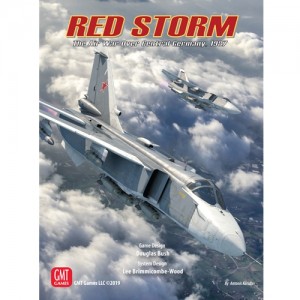 March 1987: The hopes raised by Mikhail Gorbachev's reform efforts in the Soviet Union and nuclear disarmament talks with the United States are suddenly crushed when a military coup removes his regime from power.  Hidden behind a disinformation campaign, Warsaw Pact forces prepare for war against the allied nations of NATO.

May 1987: More than 2,000 aircraft in the Warsaw Pact air forces reach a peak of readiness.  They plan to overwhelm the NATO air forces and provide cover for the Soviet armies in East Germany to roll across West Germany to the Rhine in less than a month.  For NATO commanders, the long-feared “Red Storm” in the skies above Germany is finally here...

The second sequel to the Charles S. Roberts Award-winning game Downtown, Red Storm is a standalone game that utilizes the Downtown game system to depict a hypothetical air war in May/June 1987 over the central portion of the NATO-Warsaw Pact front in central Germany.  Like Downtown and Elusive Victory before it, Red Storm is an “operational” level air warfare game where players manage large strike packages and numerous combat air patrols in an effort to strike enemy targets, protect their own ground troops, and secure control of the air above the land battle raging below.  Both sides field highly advanced all-weather aircraft, long-range air-to-air missiles, precision bombs, sophisticated electronic warfare assets, and networks of surface-to-air missiles and radar-guided AAA.

As the NATO player, you fight outnumbered in the air, but with a qualitative edge in technology and training.  NATO faces the daunting task of claiming air superiority in the face of the initial onslaught from the Warsaw Pack air forces while also delivering bombs onto Soviet and East German ground targets already on the frontline and those approaching in the rear echelons. As the Warsaw Pact player, you must push your numerous but less flexible forces to the absolute limit in an effort to overwhelm NATO forces in the air and destroy them on the ground, all while supporting your advancing ground forces.  Both players also must manage air defense networks consisting of overlapping layers of SAMs and AAA.

Like other games in the series, air units in Red Storm are flights of 1 to 4 aircraft, each tasked with different roles such as bombing, combat air patrol, close escort, or jamming support.  Red Storm features more than 50 types of aircraft, including both older “3rd Generation” workhorses like the F-4 Phantom II and MiG-23 Flogger as well as advanced “4th Generation” fighters including the US F-15 Eagle, the UK/West German Tornado, and the Soviet MiG-29 Fulcrum. Aircraft from the air forces of Belgium, Canada, West Germany, the United Kingdom, the United States, the Soviet Union, and East Germany are provided. 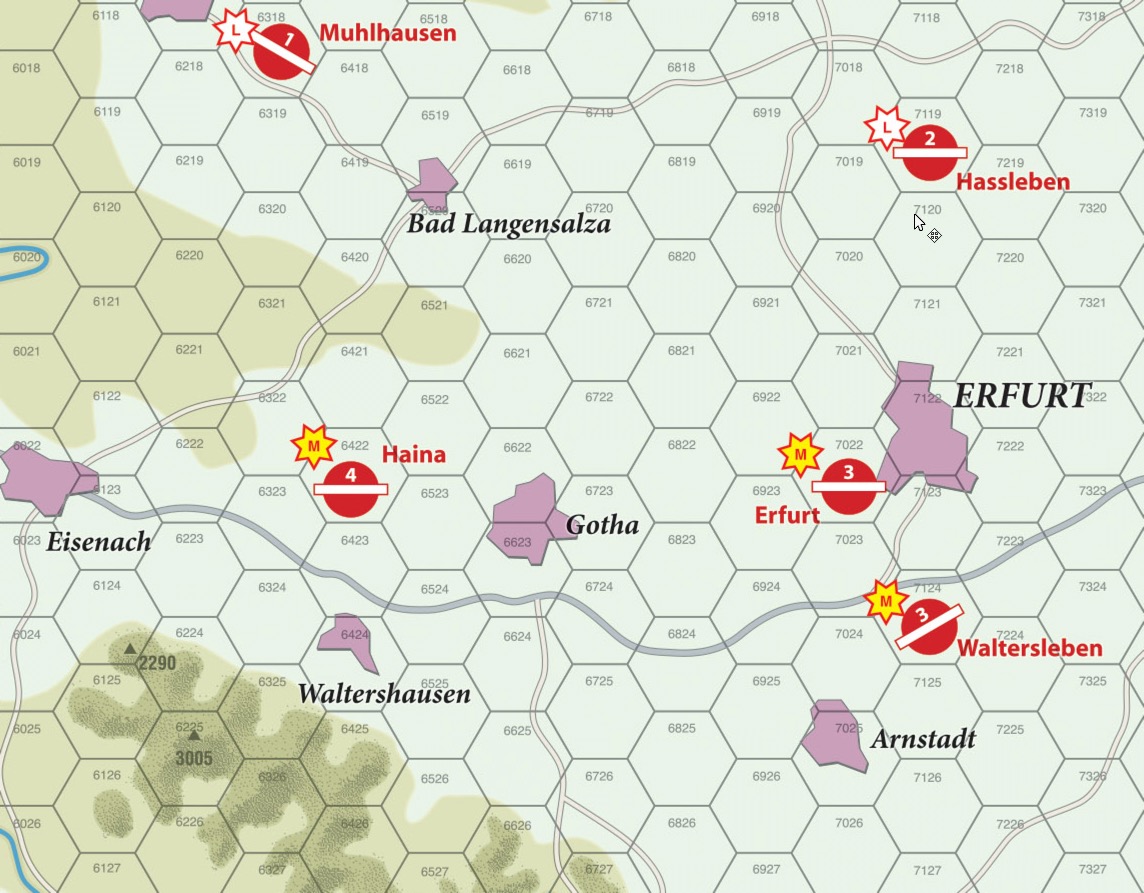 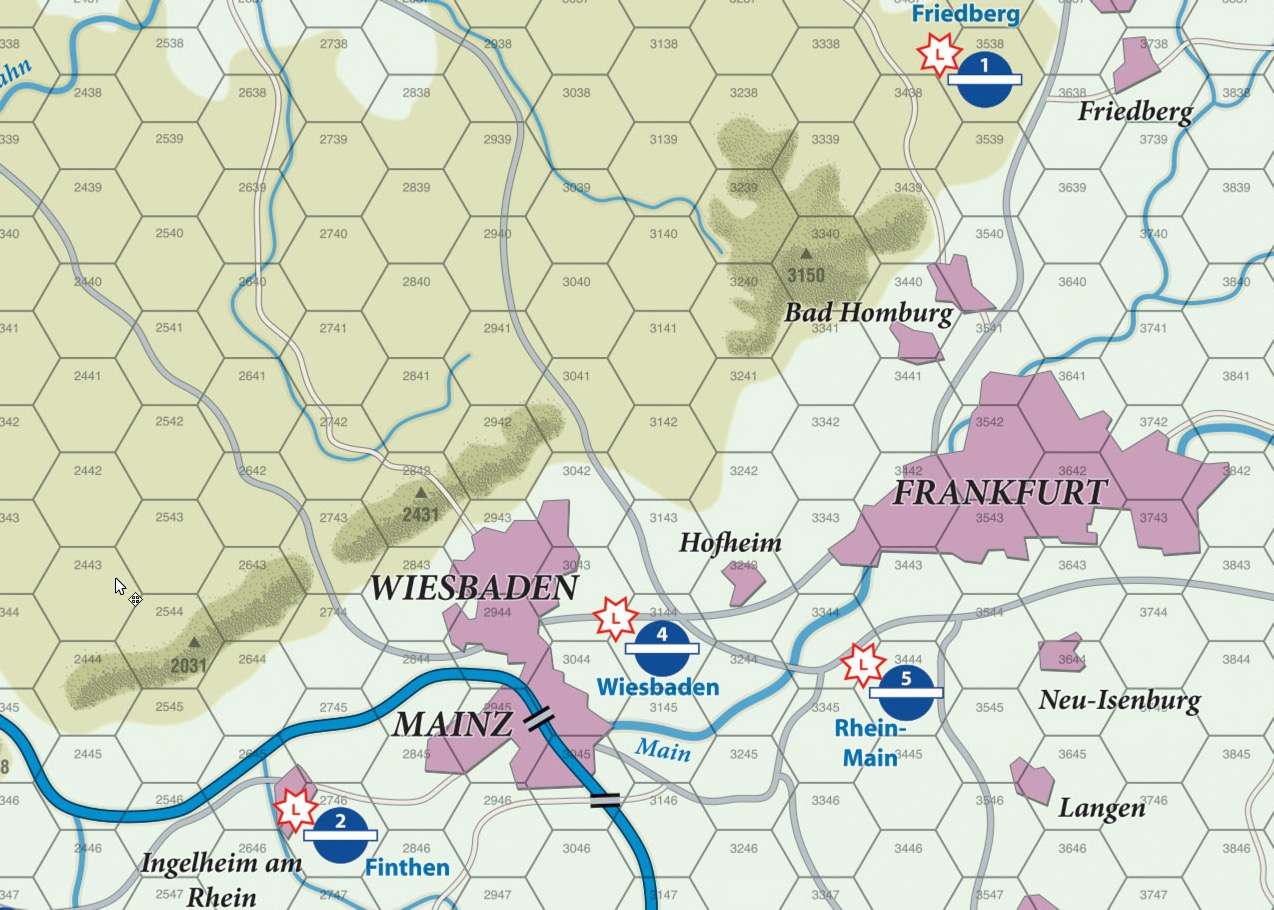 Two 22” x 34” map sheets depict the difficult terrain in the central portion of the NATO front line, reaching from the Rhine River in the west to the Thuringia region of southwest East Germany.  The map uses the same scale of approximately 2.5 nautical miles per hex used in other games in the series.  Numerous rivers, cities, and airfields dot the map in this densely populated region of Europe.  Red Storm also features a frontline that moves steadily west as the Warsaw Pact armies advance.

Like the other games in the series, Red Storm requires both players to plan both their air and ground forces prior to a scenario.  Raid forces must be generated, targets and routes mapped, and aircraft loadouts determined.  SAM, AAA, and radar units must be placed.  Both sides have to figure out how to handle the rough terrain and frequently poor weather of central Germany.

During a scenario, players progress through a sequence of phases each turn where they conduct electronic warfare, detect and track enemy flights, and move and fight with their own flights while potentially being attacked from the ground.  The heart of game is the movement phase where players use a chit-draw system that allows players to alternate moving one to five flights at a time.

The war depicted in Red Storm is a short one, with just six weeks between the start of the air war and a fateful initiation of nuclear warfare by both sides.  More than 20 scenarios feature a mix of day and night operational missions for both sides, including missions to directly support frontline ground troops as well as many missions that “go deep” behind enemy lines to strike enemy airfields, logistics, and air defense networks.  These range in size from smaller, partial-map scenarios that can be played in an afternoon to very large, full-map scenarios that might take several days to complete.  There are also scenarios depicting reconnaissance missions, airborne drops, helicopter assaults, special forces insertions, cruise missile strikes, and delivery of nuclear weapons.