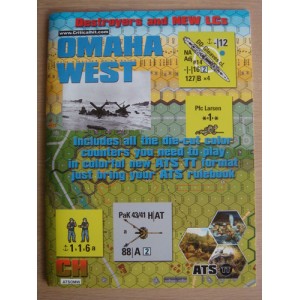 Below is the official blurb about the game...

Bam! Below is your first peek at ATS OMAHA EAST ... the massive second part of the series that will result in a record-breaking LARGEST TACTICAL-LEVEL BOARD WARGAME EVER PUBLISHED. The hexes are ATS TT-sized, and you'll need to own ATS TT OMAHA WEST to play OMAHA EAST.

Lots of smaller scenarios are the order of the day ... and of course, a follow on to "Black Day for the 116" ... the ultimate monster, depicting the entire landing across almost TWELVE FEET of map area! You owe it to yourself ... once in this life ... to set it all up and experience something that has never been done ... never been attempted ... in tabletop gaming before.

And before you quibble, whimper, and have your morale plummet into your boots ... four cheap plastic sawhorses here and two 4' × 8' sheets cut down to two 3' × 6' sheets ... easily transported at that size ... and you have the perfect stadium for giant gaming.