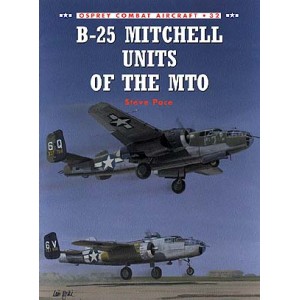 B-25 Mitchell Units of the MTO

From November 1942 through to May 1945, the backbone of the USAAF’s medium bomber force was provided by the clutch of bomb groups equipped with the B-25 Mitchell. First seeing action in North Africa in the wake of Operation Torch, and in the Battle of El Alamein, the ‘bombing twin’ proved to be one of the most successful allied combat types in the Mediterranean Theatre of Operations (MTO). The first of four volumes planned for the Combat Aircraft series on the Mitchell, this title includes first-hand accounts, 30 colour profiles and more than 100 colour and black and white photographs of the B-25 in the MTO.