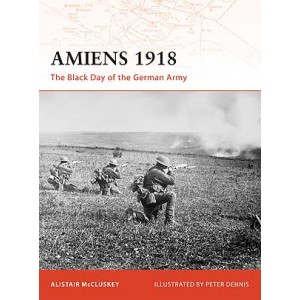 The battle of Amiens was the turning point of World War I, confirming to all that the strategic initiative had decisively returned to the Allies. The battle heralded the arrival of new strategic, tactical and operational methods of attack for the Allies. Most importantly, by the time the battle ended on 11 August the desire of the German leadership to continue the war had been shattered. In this book Alistair McCluskey describes the course of the battle and the commanders involved. He details troop movements that illustrate the rapid advance of Allied forces, all of which are analysed using both traditional and bird's-eye-view maps. Released to coincide with the 90th anniversary of the battle, this book is illustrated with some amazingly poignant rare photographs and full-colour artwork, providing a detailed analysis of the battle that heralded the beginning of the end of World War I.