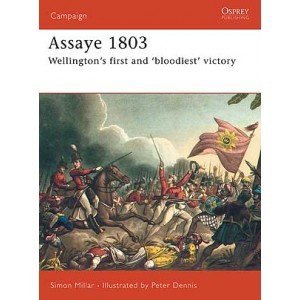 Wellington said that of all his battles Assaye, fought during the Second Maratha War (1803-05) in central India, was 'the bloodiest for the numbers that I ever saw'. A small British force,under Major-General the Honourable Arthur Wellesley (as Wellington was then known), crossed into Maratha territory in March 1803 to restore the Peshwa to his throne. On September 23, Wellesley encountered what turned out to be the entire Maratha army in a strong position on the banks of the Kailna River. The battle witnessed costly infantry and cavalry assaults, but was won by the steadiness of Wellesley's troops and his inspiring leadership.