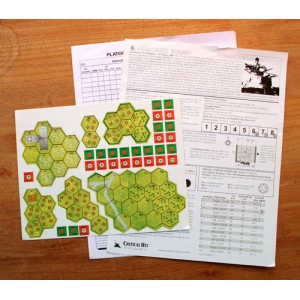 Armored Stand is a an expansion for Advanced Squad Leader that uses the Platoon Leader campaign game system. Terrain overlays are included.

The new Platoon Leader 2.0 'Booster Pack' depicts the battle for San Manuel in the Philippines of 1945. Using Critical Hit's PL 2.0 campaign system, fans of ASL will be able to command the units of the late-war Japanese 2nd Tank Division in its battle against the American 25th Infantry Division and support units. It all plays out using your existing game components, using your choice of two campaigns, one short, one the whole 'nine-yards' covering the entire battle.