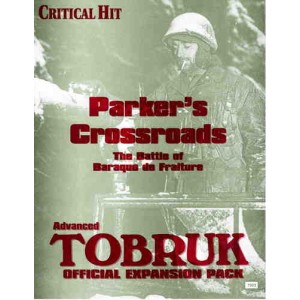 PARKER’S CROSSROADS—The Battle of the Bulge contains a highly-detailed and on-site researched game map depicting the Belgian countryside along the Baraque de Fraiture crossroads. This hotly contested battlefield was the scene of a collision between Americans and German Waffen SS and Volksgrenadier units during the Battle of the Bulge. It was later to be known as “Parker’s Crossroads”, named after Major Arthur C. Parker III, the Commander of the 589th Field Artillery unit assigned to this sector.

Another historical map researched on site by Pedro Ramis and brought to you with the cooperation of hobbyist Nadir El Farra and his FRONT LINE PRODUCTIONS, PCBOB includes 7 new scenarios and a sheet of new counters, all used on the 24" x 26" map.

Ownership of DARKEST DECEMBER or German Personnel, US Personnel, US AFVs, German AFVs, and the LATE WAR GERMAN AND AMERICAN AFVS sheet (DD_1) is needed to use this expansion.