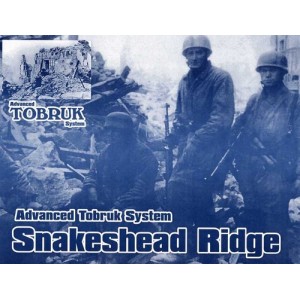 The Battle of Cassino has fascinated wargamers for decades and now ATSers can enjoy the unique cartography and situations presented in Carnage at Cassino in a new expansion pack for the ADVANCED TOBRUK SYSTEM. The eight included scenarios pit Commonwealth, French and American soldiers against those of Hitler's elite 1st Parachute Division amidst the steep hills, valleys, key bridges...in a fight for every height. The action is intense and the included ATS Battlefield Walkaround spells out the nuances of the terrain, and adds special rules specific to this release.

You will need the following counter sheets to play ATS SNAKESHEAD RIDGE: