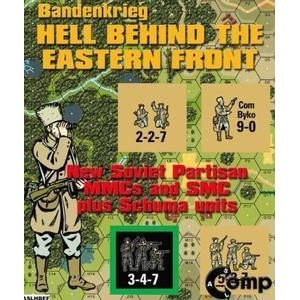 North of BORISOV, RUSSIA, 4 April 1943: Operation Lenz Sud had commenced in hopes of finally reducing or eliminating the growing Partisan force near Borisov. As the German forces began the push the partisans were ready and awaiting for an ambush. The Partisans were not trained soldiers and the tactics of the partisans were simple and the challenges put on them by their leaders were less than would be expected from a military unit. Surprise and ambush were their best tactic. Their spot chosen lay on both sides of the Narotch stream. Having capturing a German field gun earlier and using their long hidden anti tank gun—a leftover from the retreating Russians in 1941—the ambush was prepared. Mines were placed, demolition charges were planted by explosive teams smuggled behind German lines and now the wait began. One Partisan survivor remembered: “We would ambush the Germans on the Narotch stream bank. We knew the Germans planned to come to the aid of the guard from the other side of the stream. Our commander, Sagalchik, was also a guide, as he had lived in Miadel for many years and was familiar with the area. When we arrived everything was quiet. Suddenly shots were heard. We lay down and awaited the Germans. When we received the sign to attack we ran to the houses where the Germans and Lithuanian sharpshooters were. The battle lasted a few hours and the Germans dispersed.” Within an hour the fight was over leaving the battlefield in partisans hands. The Germans suffered 40 dead and over 50 wounded. “Lenz-Sud’ was off to a bloody start.

Here at CH we're into firsts. We like to delve into esoteric fronts and combatants. We don't base our creative decisions on the bottom line. We live to provide our fellow gamers opportunities to explore their labors of love, pet topics, to read-up, research ... literally 'disappear into the stacks' of their private libraries and public archives. In Bandenkrieg: HELL BEHIND THE EASTERN FRONT each and every one of those touch-points are struck like a chord. A map by Larry Winslow ... a design that has been augmented, added to ... since inception. Actions that have never seen the light of day on a historical map. It's all 'in there' and then some.

If you love new color die-cut counters with a purpose ... i.e., scenarios that use them ... you'll get Polizei infantry. You'll also get Schuma soldiers, new AFVs in black with German designations including the LKW ZIS (with Russian LMG), PzKw T26B 738(r), PSW 42 ADGZ, PSW BAF 203(r), Pzkw T-70 743(r) ... and more! And this motley crew of polyglot squads with their under-powered AFV collection has to take on the OOB of Russian Partisan counters ... all new, color die-cut beauties ... on their home turf. Besides home field advantage, the Partisans are armed with captured weapons, guile, and livestock. Yes, counters for all of the above (including Battlefield Gleaning counters via a variant rule .... for guile) are provided.