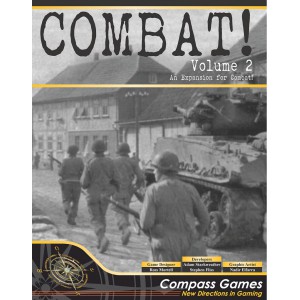 Combat! 2 is an add-on module for Combat! You must have Combat! to play this expansion. Various new features have been added such as: Elite Enemies in the form of the SS, a third Squad and command elements for the Americans so Platoon Actions can be gamed with multiple players; new weapons such as the STG44, the Thompson Sub-machine gun and the Springfield 1903; and much more! A fully structured campaign game consists of 6 ‘Chapters’, ‘Normandy’, ‘Pursuit’, ‘Hurtgen Forest’, ‘The Bulge’, ‘The Siegfried Line’ and ‘Germany’. Follow the fortunes of your squad from D-day to VE-day performing missions and patrols; will your squad be an efficient well-disciplined unit or the new Dirty Dozen?