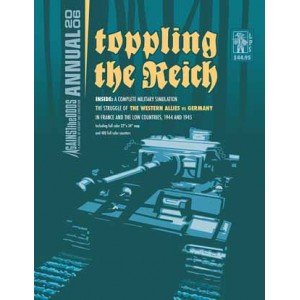 Against the Odds #2006 Annual - Toppling the Reich

Toppling the Reich:
the Battles for the Westwall

The enemy has committed a major blunder by continuing to fight west of the Rhine.
-- General Montgomery, January 21, 1945.

I want him [von Runstedt] to hang onto the West Wall as long as humanly possible. Withdrawal will merely mean moving the catastrophe from one place to another.
-- Adolf Hitler, March 2, 1945.

“We’re going to go through them like crap through a goose!”
-- General George S. Patton.

Toppling the Reich is an operational level simulation of the fighting for the Rhine River and Westwall that occurred in 1944 and 1945. Designer John Prados transports his Panzerkrieg game system to the Western Front to examine the major episodes of this clash. Using scenarios, which can also be linked together to form a campaign game, he covers the entire war in France and the Low Countries from early September 1944 to the German surrender in May 1945. Players on both sides will be challenged with conducting offensive operations as well as desperate defenses.

Units are mostly divisions with some specialist brigades/regiments (engineers, commandoes, heavy or specialized armor units). Players can form larger Corps level formations that enhance combat actions. The air war is also covered with air units on both sides conducting air superiority, ground support, parachute and aerial supply missions. The game design is easy to get into, but loaded with much decision-making for both players. The level of supply and logistical support determines how many units and leaders can conduct operations in the turn. Leadership on both sides, in the form of the various Army and Front Headquarters as well as the leaders from each, play vital roles in the various operations each turn. While the Allies can field a tremendous force across the entire front, the lack of ports and the Allied ever-lengthening supply lines will be a challenge in keeping the offensive moving. The German player will have less of a challenge in providing logistical support, but his already battered Wehrmacht, Luftwaffe and SS formations will face a hard time in fending off the enemy’s attacks while also gathering strength and resources for a counter-strike. Timing, planning, and making the most of the opportunities presented to you on the battlefield are key to success in this game by award-winning designer, John Prados.

Rules in Toppling the Reich include ones dealing with the various Army and Corps Commanders on both sides, Paratroop drops and airpower, a very clever depiction of ULTRA capabilities (and failures), the planning and timing for German counter-attacks. Toppling the Reich is actually six different games: five scenarios which cover the Western Front from September 1944 to April 1945 and one 36 turn Campaign Game which includes this entire period. The smaller scenarios include:

Scenario 1: Broad Front or Narrow Thrust? (Market-Garden)
Sept. 1-24, 1944 (four turns)
Having broken out of Normandy, Allied troops capture Paris and press toward the German frontier. The Germans strive to rebuild the strength of their Fifth Panzer Army, destroyed in the Falaise Pocket, and to reconstitute a solid defense. The Allied commander has a very limited attack supply capability and must choose between attacking all along the front or concentrating for a single powerful attack.

Scenario 2: See Germany and Die! Closing Up to the Westwall
Sept. 25-Nov. 11, 1944 (8 turns)
Against a rapidly solidifying German defense, Allied armies attempt to maximize their gains in spite of their still limited supply abilities. The full deployment of the Allied Sixth Army Group north of the Swiss border and the continued offensive stance of Patton’s Third Army press the Germans in Lorraine back towards the Rhine. At the same time, the Americans in the center take Aachen while the British attain the line of the Meuse.

Scenario 3: The Roer River and Lorraine
Nov. 12-Dec. 10, 1944 (5 turns)
Greatly recovered from its Normandy debacle, the German army by November 1944 is offering stiff resistance to the Allies. For their part, Allied armies attempt to clear the right bank of the Rhine in Lorraine, and to expand and secure their penetration of the Westwall at Aachen. This stage of the war sees some of the most bitter and bloody fighting in the Western Front.

Scenario 4: Herbstnebel-Nordwind: From the Bulge to Alsace.
Dec. 11, 1944-Feb. 2, 1945 (9 turns)
The Allied advance has been essentially brought to a halt before the Westwall. The German High Command made a conscious decision about their strategy for the next phase of the campaign. Adolf Hitler opts for a counter-offensive, and attacks are planned in the Ardennes and toward Strassbourg. The Germans throw their best forces into a last great gamble to snatch victory from the jaws of defeat.

Scenario 5: The Defense of the Rhine
Feb. 4-Apr. 3, 1945 (10 turns)
After the failure of the Bulge and Alsace offensives, an exhausted German army returns to the Westwall to discover that the Allies are already prepared for a bone-shattering frontal offensive. Allied troops grind through the Westwall defenses and the Germans attempt to hold the Rhine. Hitler, dissatisfied with the situation in the West, relieves his best commanders. With the end of the war nearing, an important question for the Allied Command is what kind of attack force should be brought to bear against Berlin.

Toppling the Reich and the 2006 ATO Annual 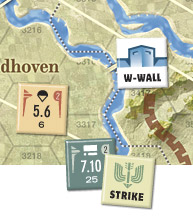